While studying abroad in Japan, it wasn’t always about delicious homemade meals or eating out at fancy schmancy restaurants. Studying abroad also meant quite a lot of… Cafeteria Food. Now, from what little I remember of elementary/middle/high school cafeteria food (the fact that I have blocked it out so well must say something…), I was not particularly impressed and half-dreaded eating in the cafeteria everyday while at Kyushu University (Kyushu Daigaku – 九州大学, shortened to Kyudai – 九大). 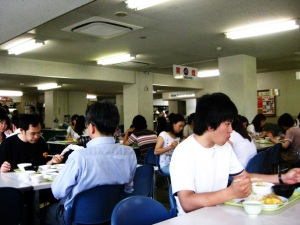 Well, let me say, I was a little bit more than impressed with Kyushu University’s cafeteria. Cafeteria Food was no longer said in an ominous voice, but now rather became a time of day I looked forward to, especially if they had a particularly delicious meal on the week’s menu. As a result, I’ll be presenting a short series of a few pictures of my favorite lunch meals while at Kyushu University. This is also a nice way of saying I regrettably didn’t take enough pictures of my lunch food or the cafeteria.

Now! A little more information about the cafeteria. There are a few options for lunch: 1) bring a bento (弁当), also known as a Japanese packed meal or as I like to call it “a very extremely pretty and fancy lunchbox,” 2) buy from the campus konbini (コンビニ), the Japanese convenience store, 3) buy from the food stand outside the cafeteria (picture below), or 4) eat in the cafeteria. 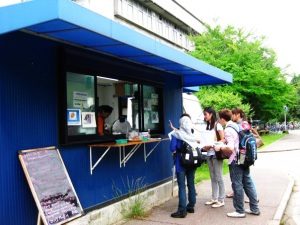 Food Stand that is geared towards a Muslim diet; Photo taken by Mizael Poh, edited by me

Although I lived in the homestay and had the option of taking a bento to school, I chose not to because of the heat (oh, the summer heat and humidity!) and the commute (don’t even get me started on this), which didn’t matter too much since it ended up being pretty fun choosing different things to eat everyday. I ate once from the food stand pictured above, bought a few meals from the convenient store, but spent most of my time in the cafeteria.

In the cafeteria, there are two lines: one for noodles and pasta, the other for rice and Western food. Oftentimes meals will include rice, miso soup or other sides of your choice. As a result, this is considerably healthier than some of school meals I remember from elementary school. Also, I probably spent about 300-500 yen, average about 400 yen per meal. Because of the now strong yen, that is about $4-6.50 each meal. While it may seem a bit hefty, considering the high standard of living, high prices and health benefits, wouldn’t it seem like a good payoff? 🙂

Until next time then!

"Dance like nobody's watching; love like you've never been hurt. Sing like nobody's listening; live like it's heaven on earth."
View all posts by Amy →
This entry was posted in Cafeteria Series and tagged cafeteria food, Kyushu University, study abroad, 九州大学. Bookmark the permalink.